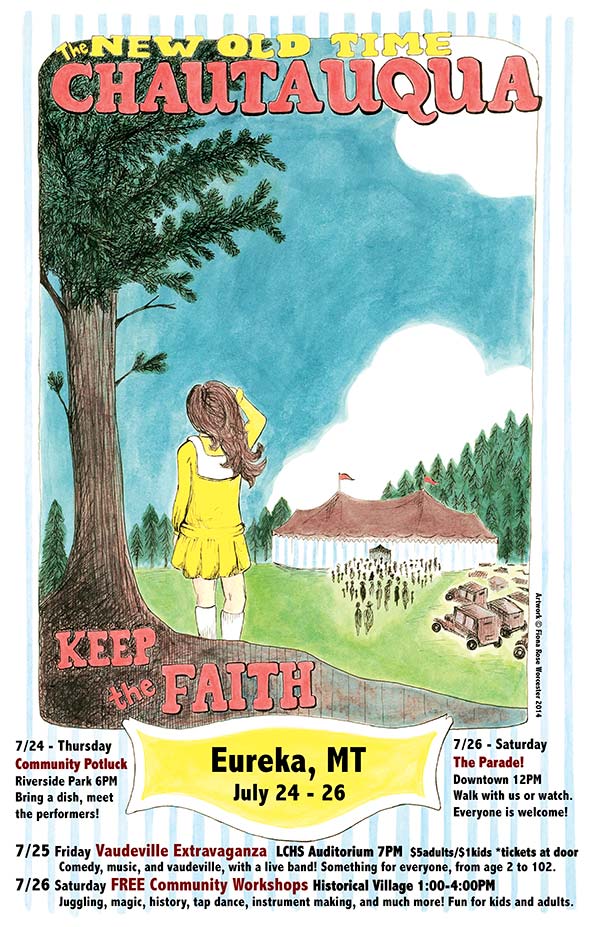 Eureka welcomed this troupe of artists and performers who entertained, enchanted, and excited us with their fantastic music, imagination, education, and modern vaudeville. They were in Eureka from Thursday, July 24 through Saturday, July 26. The Museum in the Historical Village had an exhibit through July 27 that explains the history of the New Old Time Chautauqua in words and photos.

They kick-off with a community potluck at Riverside Park at 6:00pm on Thursday... good times and good food. Everyone is always welcome – bring a dish to pass, eating utensils and folding chairs...and musical instruments if you wish.

The Vaudeville Extravaganza was Friday July 25 at 7:00pm in the LCHS Auditorium (adults $5, students $1). This two hour show offered an evening of delight for the whole family featuring both locally and internationally acclaimed acts. The Tobacco Valley enjoyed high-calibar comedy, music, and vaudeville all accompanied by their rollicking live band! Something for everyone from age 2 – 102.

On Saturday, we meet the New Old Time Chautauqua downtown for a racous parade led by their marching band rife with jugglers, stilt walkers and dancers. Kids, adults, and groups were welcome to join the performers and the band in the march to the Historical Village. We wore a costume or some came as they were. There were free workshops offered in the Historical Village from 1:00 – 4:00pm, where we enjoyed music, learned juggling, engaged in Thought Provoking Workshops, and made cool things. Plus Eureka’s Creative Arts Center was there with art projects including the opportunity for you to help build a Community Mural. It was an afternoon of wonderful fun for the whole family!

The New Old Time Chautauqua was brought to the Tobacco Valley by the Sunburst Community Service Foundation with generous support from local sponsors. For more information on any of the events, call 406-297-0197 or visit the Sunburst website.

A bit about New Old Time Chautauqua:
Chautauqua is a community-based, cultural and social movement that started in the 1870's and flourished in America until the mid 1920's. During this time there existed hundreds of touring Chautauquas that presented lectures, dance, music, drama, and other forms of "cultural enrichment."

The movement is named for a lake in upstate New York that was the site of the first Chautauqua. Performing in tents across the country, Chautauquas were once called "the most American thing in America" by President Theodore Roosevelt.

The New Old Time Chautauqua (NOTC) was founded in 1981 by a group of performers, health care practitioners, and educators as a vehicle for reviving the spirit of the old Chautauquas. It once again brought shows (in the form of modern vaudeville) and education (in the form of workshops) to rural and remote communities which, when it comes to live entertainment, are often under-served. It's a new approach to an old idea, bringing the past to the present.

For over three decades, the all volunteer troupe has staged Summer Tours in regions throughout Oregon, Washington, Idaho, western Montana, southern and coastal British Columbia and southern Alaska.

You don't want to miss the New Old Time Chautauqua’s time in Eureka!

See a 17-minute video from TEDxRainier in Seattle in 2012 introducing New Old Time Chautauqua's history and programs, with a dose of the Fighting Instruments of Karma Marching Chamber Band/Orchestra and some of our favorite perfomers!

Send Us a Message

VisitNWMontana.com is all about inspiring, promoting and helping to build and sustain NW Montana through stories, blogs, photos and fun – one person, one business and one experience at a time.

Northwestern Montana is a charming area of quaint towns, millions of acres of state and federal land, hiking, camping, waterfalls, rock climbing, fishing and hunting, skiing and snowmobiling. We offer an impressive collection of shops, art galleries, golf courses, bed and breakfasts, spas, and restaurants not to mention annual events such as the Bull Thing, the Ten Lakes Snowmobile Fun Run, and the Eureka Montana Quilt Show. Enjoy the outdoors and the small town spirit that makes you feel right at home. Stay for a short trip, or meet with a realtor to find out about owning your own little piece of Montana real estate.

Where are we and how do you get here? Fly into Glacier National Park Airport (FCA) or Spokane International Airport (GEG). Eureka is 7 miles from the Canadian (Roosville) Border and 67 miles east of Libby or 51 miles north of Whitefish.